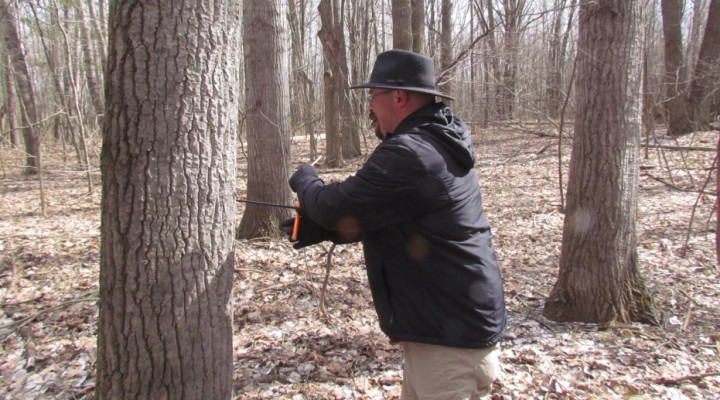 “A lot can be learned about prior land use and land cover on a parcel simply by looking closely at what is there today,” said Mike LeValley, during his “Reading the Land” walk on April 9th at the Sylvan Solace Preserve. At Sylvan Solace one can still find remnant bits of interior fencing within the area now consisting of mature hardwoods. This roughly six inch by six inch, square woven metal fencing is a clue that the land was likely once used to raise livestock. Had the livestock been cattle, the fencing would have likely been three strands of barbed wire. So one might speculate that this area was used to raise sheep or hogs.

Sheep graze the grasses down to the root line, generally leaving both roots and a plant seed bed in place. When the sheep are removed, the seed bed regenerates grasses, shrubs and wildflowers. Hogs not only graze and browse, but they “root,” gouging out the soil and often destroying the seed bed. The paucity of wildflowers and other ground cover in the areas of Sylvan Solace that were divided by interior fencing lead to the strong possibility that hogs were raised there. Additional research through county land and census records could well support or disprove this conclusion.

An absence of large rocks and mature trees, and the flat nature of the northern portion of the preserve point to the likelihood that this area may have been farmed. But the hilly and rocky lay of the southern portion made it unsuitable for farming.

Using a forester’s tool called an increment borer, Mike demonstrated how the age of trees may be gauged without resorting to cutting them down to count the rings. The presence of scattered oak trees aged around 130- to 140 years suggests that these oaks were mere saplings, or at least too small to be of much value in the late 1800’s, when much of the area was logged.

He pointed out evidence of “pit and mound” topography in places that demonstrate how other trees had been blown down, leaving a raised root ball and dip in the ground where the root ball had been dislodged. Over time, as the tree rotted, the dirt around the root ball left a mound of dirt, and the trunk of the tree eventually completely disappeared. From this type of evidence, one can learn something about wind direction and the volume of remnant logs of the same age can point to significant wind events in the past.

Stepping back farther in time, Mike talked about how the type and distribution of rocks in the area can be studied to determine whether the area is part of the glacial “outwash,” or part of the glacial moraine that was left behind as the glaciers, most recently some 10,000 years ago, retreated.

Thanks to Mike LeValley for a very interesting and different look at our conserved land.

Mike LeValley prepares to lead his “Reading the Land” walk

There are many clues about prior land use at Sylvan Solace

Extracting a sample from a living tree using an increment borer