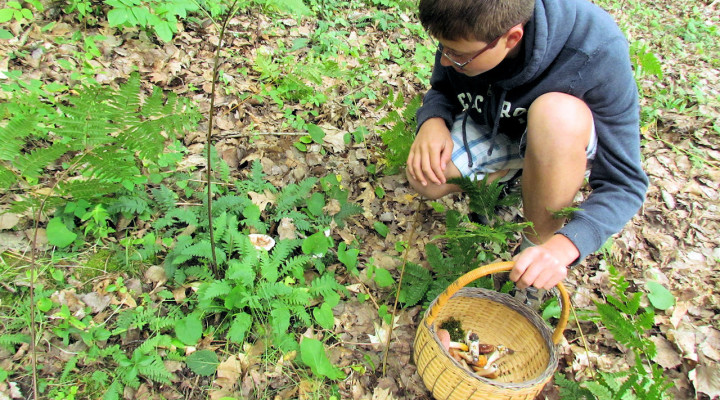 Part of the day’s finds at Hall’s Lake

Sorting out the find

One of many boletes

A squirrel dragged this mushroom into a shrub for a chew

Mushroom hunting can be exhausting

Some of our regulars and many new visitors took advantage of opportunities to explore the preserves and learn about mushrooms during two of our recent forays. On Thursday, August 27th, the focus was on the Neely Preserve and the Kabana Preserve, at the Hall’s Lake Natural Area. Our local expert, Sister Marie Kopin led a walk that turned up an amazing variety of mushrooms, some edible and some not recommended for consumption. The wetter habitat and better soil quality at the Hall’s Lake Natural Area seem particularly well-suited for late summer mushrooms.

Just two days later, edible varieties were rather scarce at the Sylvan Solace Preserve. Here, sandy soil means drier conditions. Though the pines can sometimes be great for locating mushrooms, late summer this year did not produce much in the way of diversity or edibility.

Both events also featured a wide range of ages in participants. An older group at Hall’s Lake, including guests from as far away as Ann Arbor, gave way to closer residents, including our youngest mycologist, Eli Orme, representing the “under 2” crowd while perched atop Grandpa Roger L. Hammer’s shoulders or cruising the paths in a neat little three-wheeled buggy. Any day experiencing nature on the preserves is a good day, and if it might result in a delectable fresh treat when one gets home, that makes it even better.