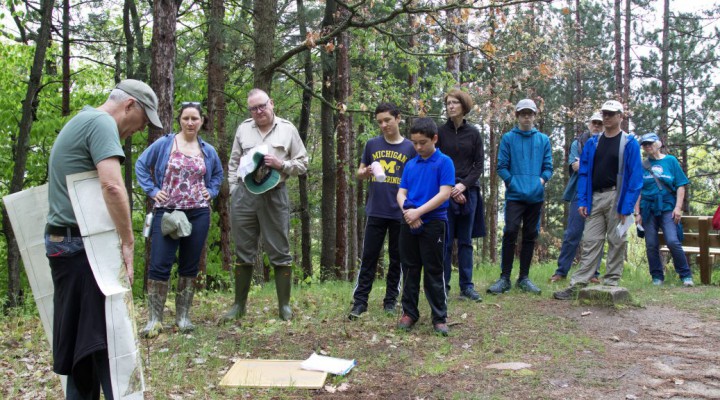 Saturday, May 25th, 2019 a group of 25 joined Dr. Fred Heck, professor of geology at Ferris State University for a hike at the Bundy Hill Nature Preserve. Heck led an exploration and discussion of the site’s geological features and what they meant about the natural history of the region. The group found a multitude of geological artifacts including igneous, metamorphic and sedimentary rocks, saddles and hills formed by passing glaciers and the most grandiose, the summit of the 1,270 foot high Bundy Hill.

At the trail head, the group stopped to look at small particles of sand, using hand lenses to discover details in the dirt. Heck pointed out the variances in color and texture that could be seen in one pinch of sand, and also noted that the composition appeared to contain mostly quartz. In rocks along the trail side, a variety of minerals, crystal sizes and structures, inclusions, faults and cross cutting minerals were found. This mineral variety, coupled with the diversity of sizes in rocks, everything from pebbles to large boulders, was further proof that a glacier had deposited sediments from all over the continent onto this humble site in the heart of lower Michigan. Heck, a true lover of geology, excitedly pointed out to the group that while Bundy Hill’s landscape tells the story of the glacier that passed over it, the various rocks told a story all their own, from different times and places along the geologic time scale.

Heck explained that the steep eastern slope of Bundy Hill was once part of the margin of a mega-thick ice sheet known as the Saginaw Lobe. As the face of the glacier melted away, sediments carried by the ice were deposited at the Central Michigan site, piling up and becoming what is now the highest point in the county. The Saginaw Lobe covered the eastern half of the Lower Peninsula until it retreated south leaving glacial till, kettle lakes and rolling landscapes in its wake. Bundy Hill Nature Preserve is a fantastic place to view the remaining signs that a once mighty, frozen mass had ruled the landscape some 14,000 years ago.