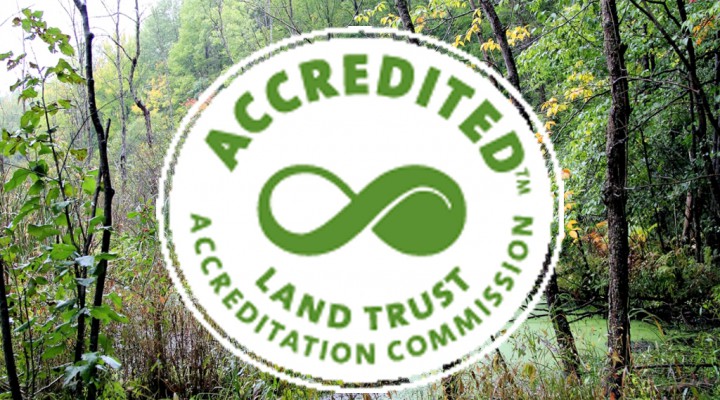 Mount Pleasant, MI – At a time of political change, one thing is clear and consistent: Americans strongly support saving the open spaces they love. Since 1985, Chippewa Watershed Conservancy, has been doing just that for the people of Central Michigan. Now, Chippewa Watershed Conservancy has announced it has renewed its national land trust accreditation – proving once again that, as part of a network of 398 accredited land trusts across the nation, it is committed to professional excellence and to maintaining the public’s trust in its conservation work.

“Renewing our accreditation shows Chippewa Watershed Conservancy’s ongoing commitment to permanent land conservation in the Central Michigan Region said Jon Breithaupt, Executive Director. “We are a stronger organization than ever for having gone through the rigorous accreditation renewal process. Our strength means special places – such as Bundy Hill Preserve – will be protected forever, making the Central Michigan region an even greater place for us and our children.”

Accredited land trusts must renew every five years, confirming their compliance with national quality standards and providing continued assurance to donors and landowners of their commitment to forever steward their land and easements. Almost 20 million acres of farms, forests and natural areas vital to healthy communities are now permanently conserved by an accredited land trust.

In 2016, Chippewa Watershed Conservancy completed a nearly quarter-million dollar fundraising campaign to purchase 100 acres surrounding Bundy Hill – the tallest point in Isabella County. The conservation group manages 21 additional nature preserves and 38 conservation easements on private lands. Over 5,200 acres have been permanently protected for the benefit of people, plants and animals.

Chippewa Watershed Conservancy is one of 1,363 land trusts across the United States according to the most recent National Land Trust Census, released December 1, 2016 by the Land Trust Alliance. This comprehensive report also shows that accredited land trusts have made significant achievements.

A complete list of accredited land trusts and more information about the process and benefits are detailed at www.landtrustaccreditation.org.