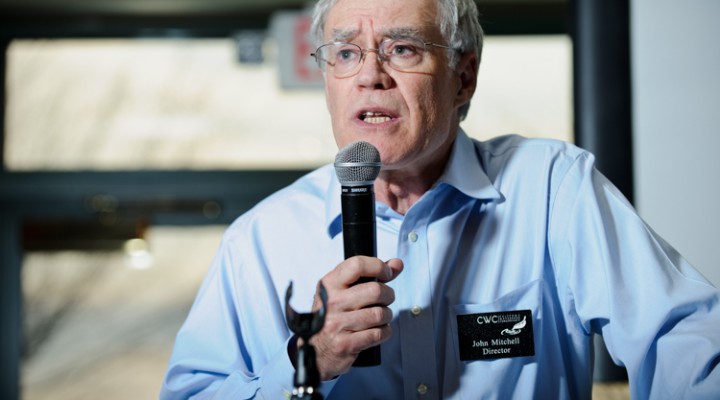 For the first time since founding the Chippewa Watershed Conservancy in 1985, John Mitchell will not be at the helm of the organization. First publicly announced at CWC’s Annual Spring Banquet on April 19th, 2018, Steve Pung, former President of Isabella Bank, has assumed the role of President of the Board of Directors, effective January 2018. Mitchell will remain on the Board of Directors as Treasurer.

“Right now there is strong leadership in (Pung) and in our new executive director Jon Breithaupt,” Mitchell said. “I”m looking forward to a new role and to what we will accomplish.”

He and a friend —the late Bob Ball— had an idea in 1985 to create a non-profit to protect land around the Chippewa River, but didn’t have the people to make it a reality; it was nine years before the first iteration of what the organization is today was founded.

“The future CWC sat as a folder in my desk drawer until 1994,” he wrote. “That spring several people…independently came to me and described what they thought this community needed; a private non-profit organization dedicated to protecting nature and giving people access to the river and other natural resources.”

“This is not goodbye, just a change in focus,” he wrote about stepping down as president. “A renewal for me as for the CWC.”

It was that foresight and dedication from Mitchell that made the CWC what it now, Breithaupt said.

“Without John’s countless hours spent negotiating deals with landowners, motivating other to contribute to our cause and raising awareness of the necessity to protect wildlife habitat and open space, our community would not be the same,” he said.

For Breithaupt, new projects will grow on the foundation Mitchell helped to build.

“I’m thankful to work under his leadership and excited about the direction our organization is headed.,” Breithaupt said. “ John has extensive knowledge of the environmental challenges that face our region and he has nurtured many invaluable personal and professional relationships over more than three decades at the helm of the Chippewa Watershed Conservancy.”

The gallery below highlights some of Mitchell’s escapades at CWC over the years.